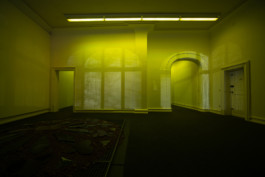 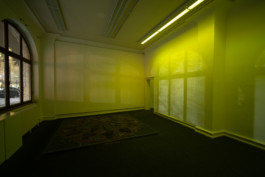 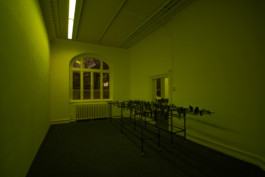 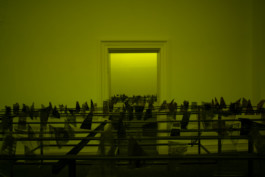 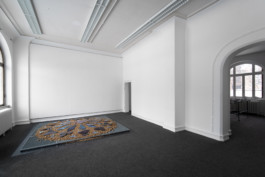 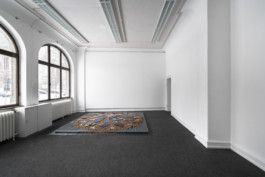 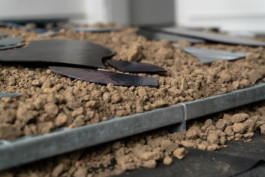 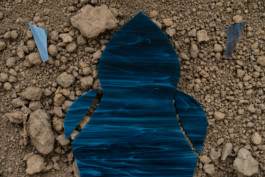 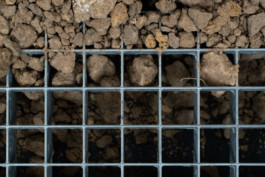 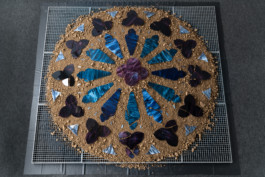 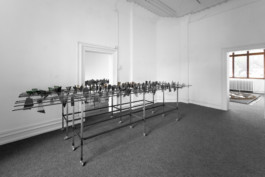 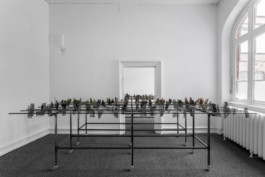 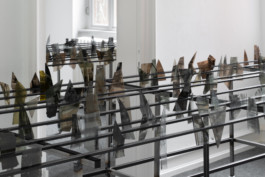 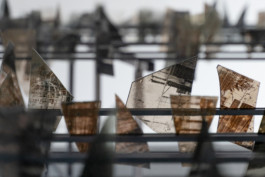 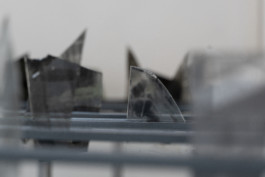 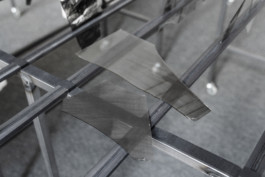 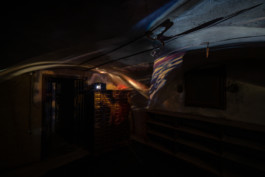 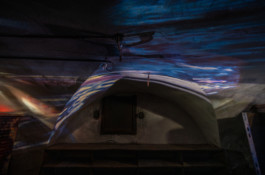 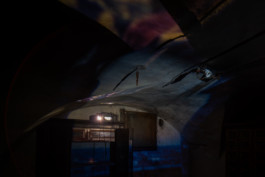 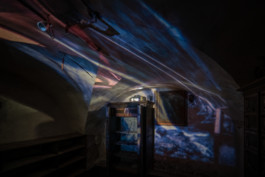 Tracing does not imply necessarily to outline a shape and thus delimit it, but it means also to find back something, to research its origins and development. It is with this approach that Matej Bosnić’s site-specific project unfolds questions upon selfhood, articulating the multifaceted nature of identity through the rhythms and pauses provided by the architectural space of Prinzenpalais itself.

The bright, wide-windowed entrance of the former bank provides the first point of reference for the incipit of the installation, sharing the same qualities of lightness, transparence and openness. Right under the window looking onto the outer environment, colorful marbled glasses lay on the ground in a circle, evoking the rose window of stained glass in the neo-Gothic Co-cathedral of Osijek, Croatia, a place attended by the artist in his childhood and referenced in previous works. Like memory’s irregular adhesion to reality, the shapes are not a faithful reproduction of the original but are, rather, its conceptualized and exploded-view version. Instead of lead came, mother soil unites and supports the rose window from underneath, reinforcing both the archaeological and ritual character of the artistic production of the piece. The act of putting pieces together and collecting traces on fertile earth reminds, in fact, not only in situ historical and anthropological research practices, but also the religious significance of circular symbolism, ancient altar constructions and rituals, and meditative practices of recollection and composition.

On the other side of the room, a movable metal rack holds broken glass pieces that, impressed with photosensitive emulsion while still intact, reveal fragments of photographs made by the artists in the past ten years. As if in a temporary storage, the recollected forms are open in their disposition, like splinters of memories that are nevertheless lost and subject to an endless re-arrangement in multiple combinations. The rack is positioned in front of an arch leading to the second room, where an identical rack is placed specularly, both impeding the passage and amplifying the mirroring effect perceived by the visitors, apparently becoming one the reflection of the other. Thus, the open and interactive character of the first room develops into a more reflective mode, consciously adding another layer of awareness around the self and its cognitive processes of personal experiences.

Completely secluded from the outer world, the third part of the project is presented in the old underground strongroom of the building . This once protected, inaccessible space is intended as a poetic analogue to the unconscious and more obscure part or the self. Here, memory is not dissected, analyzed, and reconstructed but is a flux of events and images that mingle and move according to unclear patterns and rhythms: two super 8 projectors pass to each other a film that combines the artist’s work with archival family material from the ‘70s. Endlessly flowing on the room’s ceiling and walls, the film, edited at a framerate of one second, accompanies like flashbacks the projector’s beats, whose rhythm is further amplified by 12 hidden solenoid hitting the metal shelves in the vault. Between historical documentation and abstract artworks, here the core of identity is shown as a diffuse ambiance melting facts with imagination in a fluid matrix that progresses through the rhythm of life.

The triadic articulation of Bosnić’s work examines three fundamental dynamics in our selfhood, inquiring the role of outer inputs in defining our subjectivity; the role of consciousness in reflecting upon outer influences, memories and inner feelings; and the role of deeper impulses and emotions, which is where creativity comes from. The resonance of this triad with Freudian concepts of ego, super ego and Id does not aim to dissect scientifically the notion of selfhood, nor to give clear answers. Rather, it urges the visitors, by immersing them in a non-narrative spatial continuum, to raise even more questions: is a subject indeed separable from the outer world, and can we really trace a clear line between our surroundings and us? Or is this line fluid, constellated by mutable points of connections and disconnections, a porous zone of overlapping and mingling affects? The only answers are the fertile inexplicability of meditative, artistic and spiritual practices embedded in our culture, and the perpetual reminder of how our concept of identity is constricted, multilayered and open to an infinite number of combinations and mirror-like reflections.